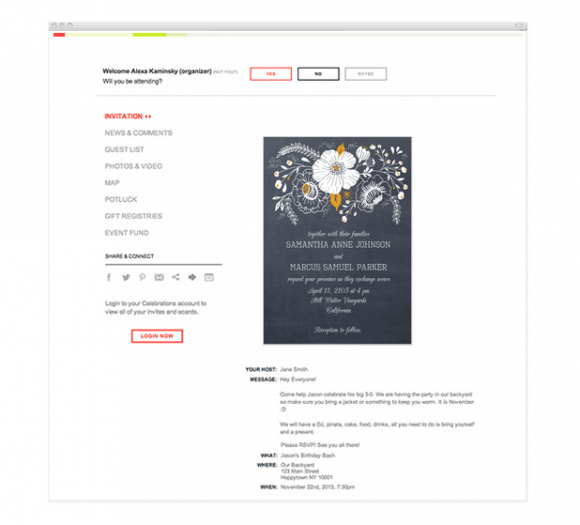 August 28, 2014
This entry is part 2 of 2 in the series Wedding Invitation Etiquette

Wedding invitations used to be black ink on white or cream paper. The Victorians would have been taken aback by the colorful invites we send out these days. And their brains would explode at the thought of e-invitations.

Online wedding invitations have been popping up more and more, but they’re controversial. Email is considered a casual form of communication, so some feel it’s not wedding-appropriate.

Here’s the deal: Whether or not they should, online invitations to a wedding are going to upset some people who see them as inappropriate. I recommend print invitations in most cases.

But if your wedding has all of these elements, online invitations are worth considering:

An e-invitation is, by its nature, casual, so it’s not going to appropriately represent a more formal, lavish event. A youthful crowd is going to be more accepting of an email invitations — and potentially more in tune with their inboxes as well. An older crowd may not be in the habit of regularly checking email or even have an email address. So if you send out an email invitation, be prepared to make follow-up phone calls. There’s also always the chance you invitation could accidentally get flagged as spam and never get seen as well. It’s kind of risky business.

But the main reason you’re likely to consider an e-invitation is because of your budget. And you know what? That’s fair. Print invitations can be expensive, and eventually, they’ll in all likelihood go in the trash. E-invtes can save you a ton of money — just be prepared with a non-computer-based follow-up campaign in some instances.

While online wedding invitations are still a touchy subject, e-invitations for pretty much every other wedding event is pretty accepted these days.

However, if the event is unusually formal, like a bridal shower tea at a fancy hotel, a print invitation may better convey the formality of the event. If in doubt, ask yourself: Will an online invite cue your guests appropriately or not?

One note: There are many free online invitation services on the Internet — Evite, Celebrations (formerly Pingg, pictured here) and Paperless Post to name a few. Use one of those rather than sending a regular old message or posting an event on Facebook. It’s a nice touch to mimic the look of a print invitation even though you’re sending an online one.