Recently I showed up to a friend’s dinner with an unusual contribution to it: Groundnut Cakes, which, as you can see above, is from a recipe originally published in the The Carolina Housewife, “a very early and rare cook book published in Charleston between 1850-1860.” I personally came across this recipe in the South Carolina Junior League Cookbook, first published in 1950 with a slew of very old local recipes.

Check out the recipe above. Here were my questions:

1. Does sherry really prevent peanut butter from oiling? (More importantly, can I get away with already-made no-sugar-added peanut butter?)
2. 10 eggs? Really?
3. 1 pound each of sugar and butter? Really?
4. “Puff paste” is “puff pastry,” right?
5. Does “tin” mean muffin tins (and if so, that brings up so many more questions), or could that have been what they once called baking sheets?
6. Is this thing open-faced, or do they assume I know to fold over the pastry? (Because I don’t.)
7. What the heck is a “slow oven”???
8. How’s this thing supposed to look, and what is it exactly?

Evidently, this is the only recipe not on the Internet — I couldn’t find a thing resembling it, other than one that was in the same 1850s language word for word, so that was no help. However, I do know now that a “slow oven” means “low oven,” which is about 300-350 degrees. (But how long do you cook it for? It’s a mystery!)

At different times I determined I was making: a souffle, a pie filling in a puff pastry crust and a peanut butter precursor to my mom’s cream cheese bars.

In short, I had no idea what to expect.

I followed the instructions to the best of my ability and was surprised when this came out of the oven. 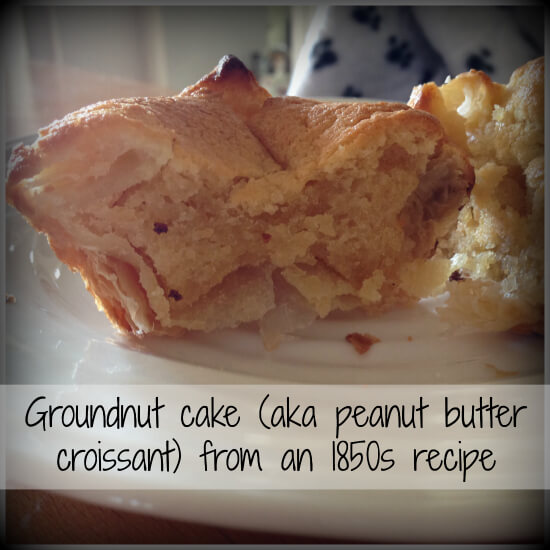 It was really like someone took an almond croissant and just adjusted the recipe for peanuts. When I looked up a recipe, the almond paste in the middle isn’t a far cry from what I made.

The verdict: It was tasty but didn’t taste like a dessert. It tasted like breakfast. And for all the sugar it contained, it was only slightly sweet, which made me wonder if dessert back then was a different sort of thing.

All that said, why in the world did peanut butter croissants ever fall out of favor? This should totally be a croissant option at the bakery! My husband, at least, would get it for sure.

The Pots & Pans You Should Register For