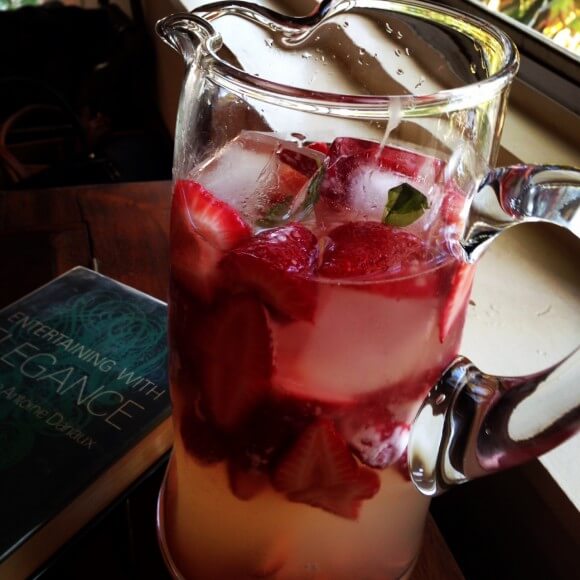 Here’s something I didn’t know until reading Genevieve Antoine Dariaux’s Entertaining with Elegance published in 1965: Punch was really uncool in the 60s. Dariaux spends much of the chapter she dedicates to punch deriding it. And right before she shares a few punch recipes, she admits she had to go to her friends for those recipes, who had to scrape up the recipes themselves:

“Most of them, I must admit, said that they never serve punch themselves, but they remembered a recipe that their great-uncle had brought back from a voyage to Martinique, or that their grandmother used to serve.”

We have lots of good recipes from Martinique in my family too.

Something else I realized while making this punch: I don’t have a punch bowl or punch glasses. And I had this moment where I was like: I just got married, and I didn’t think to register for a punch bowl???? But then I realized I don’t really drink or serve punch anyway (we’re not that different from the 60s after all!), and if I do, I’m not going to serve it in a bowl.

She said to use one large block of ice, which melts slower, but I modernized it and used King Cubes instead. Btw, King Cubes are a huge hit in my household in general — my husband specifically requests them whenever I make him a drink. I put a little mint in some of the ice cubes in case you’re wondering why there are weird green flecks in the drink. I’ll do fruit next time.

You can read more about Dariaux’s recommendations for a very booze-centric bar here, and check out her wine cup recipe below. Dariaux calls it punch, but it’s really more like a fruity white wine spritzer or a white wine sangria. Either way, it’s both tasty and pretty — it would be perfect for a bridal shower or a summer party. I wouldn’t hesitate to serve it again.

The recommended proportions are 1 bottle of dry white wine (muscadet, Moselle, etc.*) to 1 bottle of soda or seltzer water, but soda can be reduced ½ or even ¼ of a bottle if a stronger punch is desired. In a bowl, place a generous quantity of cut fresh fruit: peaches, pineapple, strawberries, apricots — either a single variety or a combination. Sprinkle over the fruit 1 cup of powdered sugar. Let stand for one hour. Stir, pour over a block of ice in large punch bowl. Add the wine, soda water and liqueur glass of brandy** for every 2 bottles of wine.

* I couldn’t find either of these at my local BevMo. The fellow working there implied that I didn’t know what I was talking about to ask for one or the other because I guess he didn’t think they were very similar. (Fair enough because I don’t know what I’m talking about.) He recommended 14 Hands chardonnay, which I had my doubts about because of the oaky factor, but it worked out well.
** I forgot to add brandy. No one missed it.

Check out my Retro Entertaining Pinterest board for more!

← A Mysterious Etiquette Book
Check Out My Guest Post on AmberSpire →