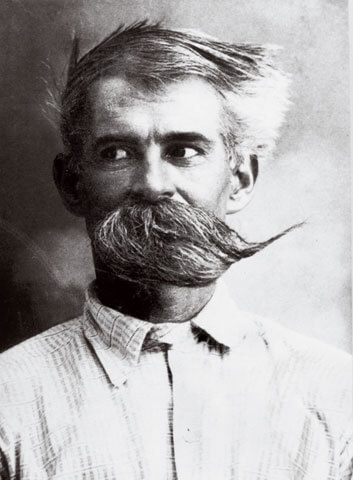 We’re getting silly with Vintage Dudesday today. This looks a little like Steve Martin being extra goofy, no?

But this is actually the self-proclaimed Mad Potter of Biloxi George E. Ohr and his real mustache. He lived from 1857 to 1918, and the only date I have on this photo is “before 1918.” When would you guess it was taken? I’m going with 1905.

Ohr had a distinct style, both in his pots and in his promotion of them, which were way ahead of his time. For example, one sign declared this: “Unequaled unrivaled — undisputed — GREATEST ART POTTER ON THE EARTH.”

Sounds like he’s got a bit of a Kanye West thing going on.

His most prolific times were during the Victorian and Edwardian periods, when his misshapen pots with wild colors were very much outside of the norm, as were his prices, which sometimes ran $25, or $500 today.

He received some notoriety during his life but little money. But his pieces are very valuable today, selling for $20,000 to $60,000 each.

There’s a great article in Smithsonian Magazine where you can see Ohr’s art and read more about him.