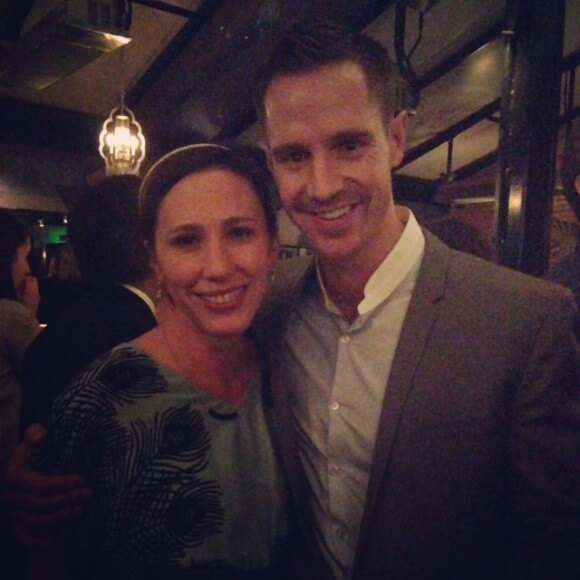 A friend invited me to join her to the Veronica Mars premiere because she knows I’m a fan. She also knows I’m a fan of Jason Dohring (aka, Logan Echolls). We walked by him after the movie, and she asked if I wanted to get a photo with him. I said I’d be too embarrassed to ask. She said: Well, none of the other people hovering around him seem to be embarrassed.

Later, at the after-party, we turned around, and he was standing right in front of us. So my friend grabbed my phone from my hand asked Jason if he would mind posing for a photo with me. And that’s how I ended up with this photo.

God bless my friend for having nerve I don’t. I would have never asked on my own because:

a) I’m a coward.
b) I hate the idea of bothering a celebrity and requesting something of someone I don’t know.

But in this particular instance, I was being silly. At the premiere of a movie, it’s kind of a celebrity’s job to take photos with folks, especially in this instance, when so many people at the party contributed to the KickStarter campaign that funded the movie.

So here’s my rule of thumb for when it’s okay to request a photo/ask for an autograph/etc. of a celebrity:

Celebrities at an event actively promoting their work or a cause — a premiere, Comic-con, a fundraiser, a talk show, etc. — are fair game. And do them a favor and use the hashtag/Twitter handle/whatever it is they’re promoting when you post a photo with them on your social profile. Ideally, this is an even exchange. You get a photo with a celebrity. They get some free publicity.

That said, recognize when they seem to be on a break or that you would be intruding. I was at another premiere — I swear I don’t go to these regularly — and saw Alexander Skarsgard in a conversation with Jack McBrayer. I desperately wanted to ask them for a photo because how funny would it be to have a photo in between a True Blood vampire and 30 Rock‘s Kenneth the Page?

But I didn’t because:

A. I’m a coward. (This has been established.)
B. They were off to the side, having a conversation. I would have been interrupting them.

So be aware, even at a promotional event, when to leave a celebrity alone.

Be wary too of approaching an off-duty celebrity, so to speak. In most instances, I wouldn’t recommend requesting anything of a celebrity in their day-to-day life. That said, celebrities who aren’t regularly recognized might get a kick out of it. But it’s a major imposition if, say, a celebrity is having a romantic dinner or a heated conversation or even attending their kid’s recital.

If in doubt, think of it this way: If you were in their shoes, would you want a stranger — and maybe even multiple strangers — coming up to you at that moment and asking for a favor?

For more, check out my Modern Etiquette Pinterest board.

The Engagement Ring Selfie: Ring Fingers Up or Down?

Is It OK to Take a Selfie at a Funeral? (Do I Really Have to Answer That?)