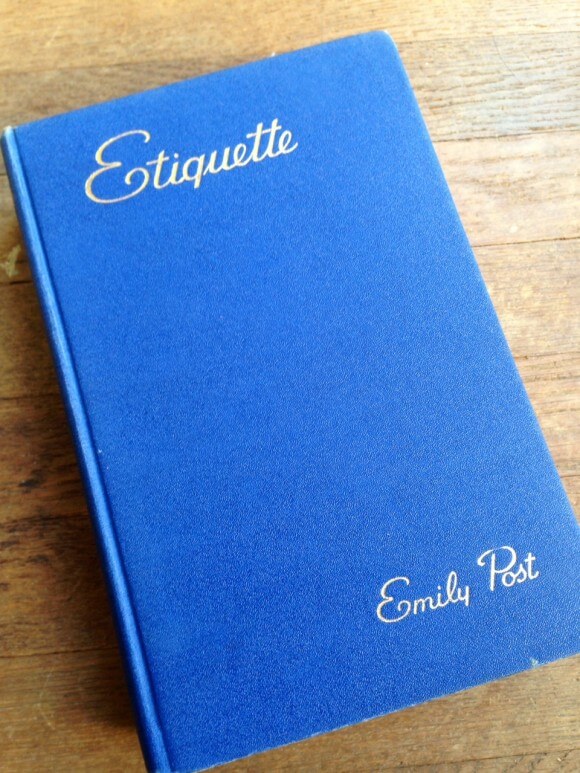 My husband found this 1942 Emily Post Etiquette book for me. There’s so much that’s interesting about it.

Check it out. Even though Emily Post’s first etiquette book was published in 1922, it references other books she wrote, such as Children Are People, under her name instead of her etiquette books. Also “(Mrs. Price Post)” is included under her byline of “Emily Post.” She’d been divorced from Edwin Main Post since 1905 at this point. Did she just like the idea of working her maiden name into her writing? Or maybe her maiden name carried enough weight that it was useful to include it? 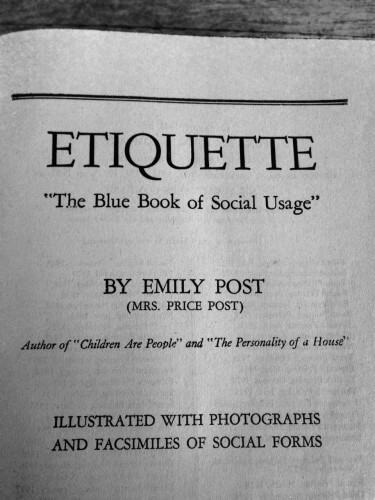 Because this book was published during World War II, it contains a wartime supplement with all sorts of interesting tidbits about etiquette during times of war. Here’s the blurb at the beginning explaining the production of the book wasn’t wasteful. 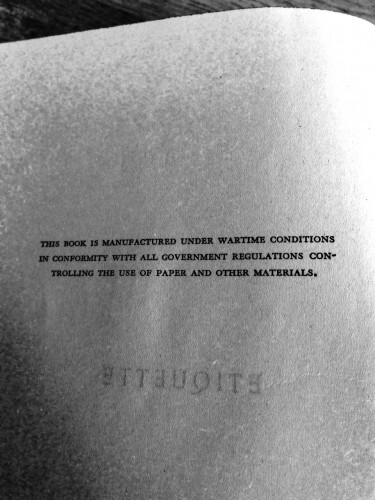 In the wartime supplement, there’s a a section on “Hospitality Without Waste” that advises: “The perfectly simple solution is that portions be cut in half, and every course passed twice!” So, for example, it recommends cutting the “little squab chickens” you serve as an entree in half.

There’s also a section on “Sugar Courtesy” because it was being rationed at the time. Post recommends carrying “saccharin, saxin or crystallose in a small container wherever one goes.” I wonder how many people did that?

Also interesting is the section: “Certainly Write to Him!–Write to Them All,” which says, “Among the peace-time rules of etiquette which have definitely ‘about-faced’ in war-time, none is more conspicuous than the reversal of the advice to young girls not to write impulsive letters to their boy friends.” I think writing to soldiers is a wonderful thing to encourage — in fact, I had a soldier pen pal during the Gulf War — but it’s interesting to think that letters to boyfriends during times of peace were discouraged.

And here’s another section titled: “Officers Do Not Wear Boutonnieres Nor Carry Bundles.” It explains the officers are not to decorate their uniform in any way or carry anything extraneous to their military equipment. (Is that still the case?)

So that’s latest addition to my collection!