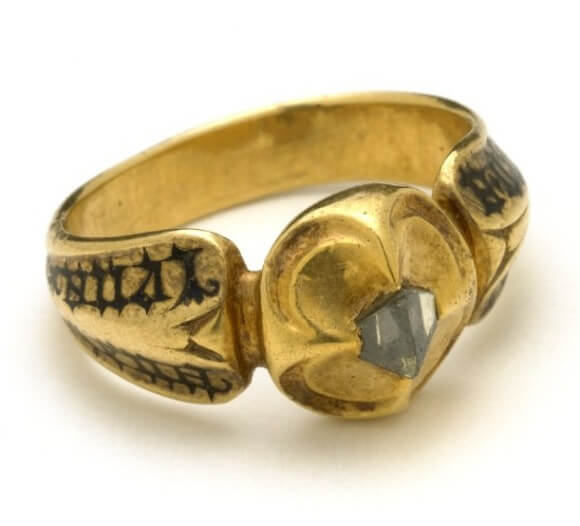 There’s a lot of newly engaged couples in the world right now with Valentine’s Day, New Year’s Day and Christmas just behind us. (The all-time most popular times to get engaged.)

And with all these newly engaged couples around us, I thought I’d look into how proposing with an engagement ring became a thing.

There are many instances of a form of jewelry — made of anything from rushes and cords to iron and gold — to represent love in our very early history, but the first known instance of a diamond engagement ring was in 1477. Archduke Maximilian of Austria proposed to Mary of Burgundy with a ring that had flat pieces of diamond in the shape of an “M.”

It’s worth noting that Mary of Burgundy ruled the land of Burgundy and was very wealthy, and so, had her pick of suitors. Is it coincidence she picked the man who gave her a diamond ring? (Honestly, I have no idea.)

Just to give you a sense of rings of the time, the photo above depicts a 15th century point-cut diamond ring before diamonds were cut and polished to reveal their brilliance.

The original point of engagement rings was simply a visual way of saying: This woman is spoken for. They were also handy for making intentions clear and tying a man to those intentions by giving something of worth to the woman.

Traditionally, once a woman has an engagement ring in her possession, it’s her property, and she has no obligation to return it if the wedding is cancelled. This was especially true if a man broke off the engagement. In the 19th century in particular, society then viewed the woman as lacking, and this made it harder for her to snag another man. The ring gave her some needed financial assistance.

There is some practical thinking behind the diamond as the engagement ring stone of choice, believe it or not. It’s one of the hardest stones around and can handle daily wear and dings in a way that many stones cannot — emeralds, for instance. And it is said to represent the strength of the love it symbolizes.

But that might be De Beers talking, the company who helped bring diamonds into fashion in the 1930s. De Beers started a wildly successful marketing campaign associating diamonds with celebrities. They also helped make diamonds the norm for engagement rings after the Great Depression, when there was a decline in the diamond’s popularity. We even have De Beers to thank for the “Diamonds are forever” catchphrase.

I’m toying with the idea of having a reoccurring feature on origin stories, so be on the lookout for more — and feel free to make requests!

Photo via The British Museum